Brantley Gilbert at the T-Mobile Center on Tuesday, November 29th 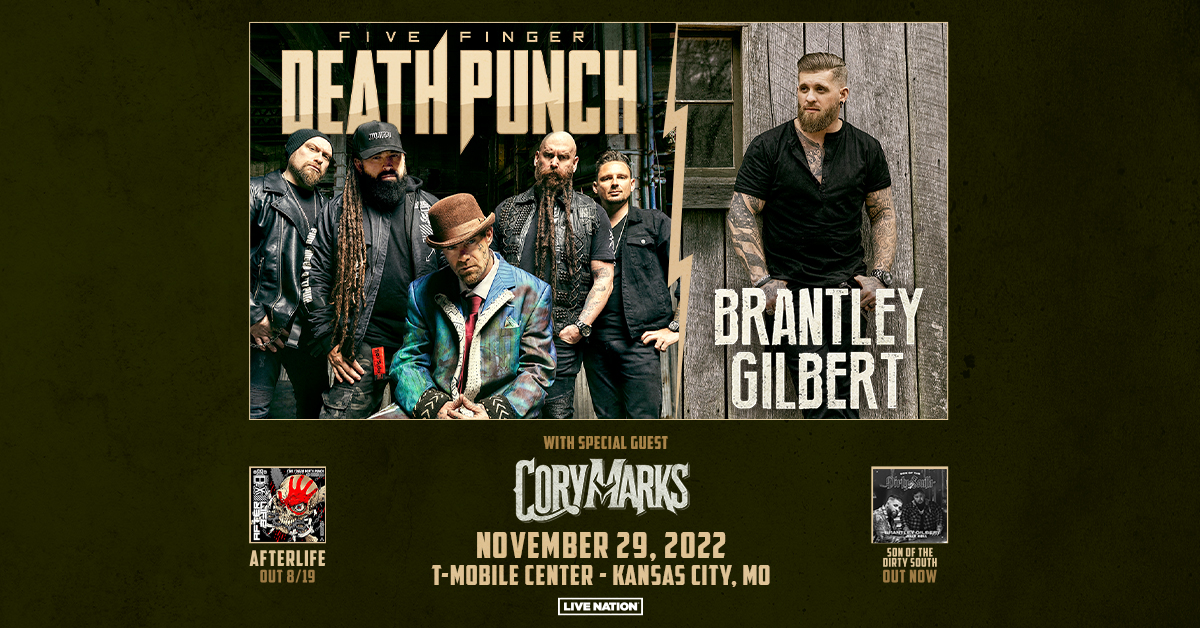 Multi-platinum powerhouses, Five Finger Death Punch and Brantley Gilbert are joining forces this fall for a massive US arena tour with support from newcomer Cory Marks. Produced by Live Nation, the tour will stop in Kansas City at T-Mobile Center on Tuesday Nov. 29.

Combining the outlaw country of Eric Church with the blue-collar rock of Bruce Springsteen, Brantley Gilbert is one of the harder-edged names to emerge from the contemporary Nashville scene. The self-proclaimed small-town guy has also barely left the road since emerging in the late ’00s, supporting the likes of Willie Nelson, Toby Keith and Tim McGraw, as well as headlining his own tours: 2012’s Hell on Wheels, 2016’s Take It Outside and 2018’s The Ones That Like Me. As you’d expect, the Brantley Gilbert live experience is a loud and proud one, with his array of fist-pumping, foot-stomping anthems often accompanied by dazzling pyrotechnics, swirling lasers and LCD visuals.

Born in Jefferson, Georgia, in 1985, Gilbert grew up listening to a mix of Southern rock, alternative and country, but only decided to pursue a music career himself following a near-fatal truck accident at the age of 19. After initially performing as a solo acoustic artist, Gilbert assembled his own band to help bring his rowdy sound to life and in 2009 released his debut album, Modern Day Prodigal Son. Follow-up Halfway to Heaven arrived a year later, but only found a large audience in 2011 when it was reissued by Gilbert’s new label, Valory Music Co. The record not only reached No. 4 on the Billboard 200 but also spawned two US Country No. 1 singles, “You Don’t Know Her Like I Do” and “Country Must Be Country Wide,” both of which helped Gilbert pick up the CMA Triple Play Award in 2013. Gilbert consolidated his new-found success with wins at the ACMs and iHeartRadio Awards, and 2014’s chart-topping Just As I Am, which also sold over one million copies and produced two more No. 1 hits, “Bottoms Up” and “One Hell of an Amen.” Just like its predecessor, 2017’s The Devil Don’t Sleep peaked at No. 1 on the US Country chart and No. 2 on the Billboard 200, and was supported by a sell-out tour of the same name. Gilbert also has a strong social media presence, amassing over one million followers on both Instagram and Twitter, and 3.5 million on Facebook.