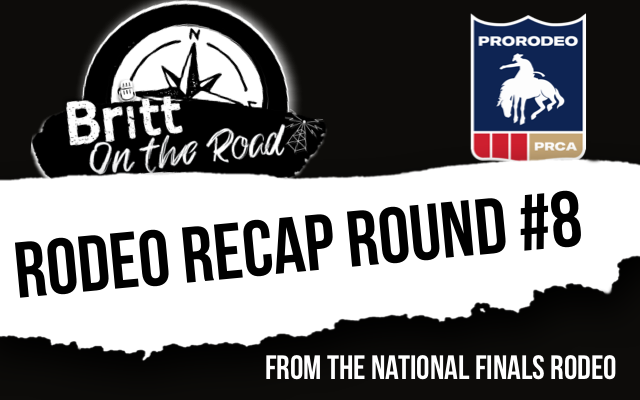 His latest came at the 2021 Wrangler National Finals Rodeo presented by Teton Ridge when he secured his third consecutive all-around world champion Thursday night before 16,948 fans at the Thomas & Mack Center.

“It means a lot to me because that means I put together a full year where I was doing two of the toughest and most dangerous (events),” Wright said. “I think it’s pretty sweet that I had so much luck and kept my body this healthy.

“Oh, it’s awesome I mean Trevor is the greatest there’s ever been. So, to have my name next to him it’s pretty awesome.”

“I’m here to win rounds, I’m not worried about gold buckles right now,” Wright said. “I’ll worry about them when I’m holding onto them.”

Wright has $498,328 in the all-around the PRCA | RAM World Standings. He secured his latest all-around crown, thanks to splitting the win in Round 8 in saddle bronc riding with a 91-point ride on Beutler & Son Rodeo’s Foul Motion. He earned $24,166.

Wright has earned $598,990 so far this season in saddle bronc riding and bull riding. That shatters Trevor Brazile’s PRCA all-time single season earnings record of $518,011, which was set in 2015. He will have four more outs to increase the all-time mark. His run at this year’s NFR is highlighted by a 94.5-point bull ride on Powder River Rodeo’s Chiseled in Round 5. He has one split win and two second place finishes in saddle bronc riding.

“Any record that he (Brazile) sets has a special meaning,” Wright said. “A lot of people thought it was impossible to beat (that record).”

Feild added to his history by winning Round 8 with an 87.5-point ride on Hi Lo Pro Rodeo’s High Heels at the Thomas & Mack Center.

“That ride was a lot of fun right out of there,” Feild said. “Then about six seconds the lights were going out. I knew I just had to bear down and keep my composure.”

Feild won Round 3 outright with a 90-point ride on Frontier Rodeo’s Full Baggage and split Round 4 with an 87.5-point ride on Bar T Rodeo’s Outlaw and then won Round 5 with a 91-point ride on Brookman Rodeo’s Famous Dex, setting the stage for Round 8. Feild won a PRCA record six rounds at the 2011 NFR.

“My goals are maybe not exactly how I wrote them down, but they are lining up for the end one pretty good,” Feild said.

The Edgar, Mont., cowboy won his third round of the 2021 NFR, snaring the Round 8 title with a 92.5-point ride on Stace Smith Pro Rodeos’ Let’s Gamble. He has placed in five of eight rounds.

“I bucked off a couple now and I was trying to completely forget about those,” said Breding. “I watched some videos of this bull I had tonight, and I really liked the looks of him. I knew I had another really good opportunity to be doing this interview if I could just stay forward, get him rode, and it worked out pretty good.”

Breding acknowledged there has been no secret formula to his success.

“I’ve just been treating it as one bull at a time and like I said, not letting the bad get to me,” Breding said. “I had that bull last night rode I felt like and (he) got me down before the whistle so I was little bummed out, but I had to get over that today and make sure it was out of my mind to do it again.”

Breding is fourth in the world standings with $237,248 and leads the average with 518 points on six bulls.

“I definitely think I need to not let myself get complacent,” he said. “It’s definitely the best I’ve ever done here but I need to treat it likes it’s not and that I have something to prove. Go out these last two (nights) like I have been and try to finish off strong.”

Steer wrestler Lummus keeps rolling with another round win
Steer wrestler Will Lummus has been rolling at the 2021 Wrangler NFR, and that trend continued Thursday night.

The Byhalia, Miss., cowboy clocked a 3.4-second run to win Round 8.

Lummus also split the Round 4 win and split second place in Round 5. He’s fourth in the world standings with $163,259. He also leads the average with 34.4 seconds on eight head.

The steer Lummus drew for Round 8 was the one Tyler Pearson won Round 5 with, stopping the clock in 3.6 seconds.

“I did, I just had to hit the barrier and use the steer the right way,” Lummus said. “I was upset with myself last night; I had a good steer last night and I backed of the barrier, and it cost me. I ended up 6, when I should have been second or third. After last night I was second in the average and I decided if I want a chance to win a gold buckle, I must take chances. Those guys all around me are not going to back off and I can’t either.”

Lummus knows nothing will come easy in Round 9 and Round 10.

“I think we do a pretty good job preparing steers every year, and this year we have had a bunch of really good steers, that have given a lot of guys a chance to win and fight for that average and even a world championship,” Lummus said. “I think everyone who makes it here to Vegas has a shot to be No. 1 and it’s been that way for the last decade. Whether they are first timers or been here before, if they are in the Top 15, anyone of them can dang sure make it happen and that make my event to tough and fun.”

“We knew we had a good steer and I made a little mistake in the earlier rounds and I just thought it was time not to back off and go at them,” Smith said. “The steer wasn’t easy to heel he (Jade) had to do a good job catching him.”

Corkill was quick to praise his partner.

“First we had a really good steer and he (Clay) had it on him it felt like as fast as I have ever had one turned here and I caught,” Corkill said. “It was all him tonight. This is what we do it for. The hardest thing is staying patient through the corner and not getting ahead of yourself. We are at the point now where we need to win and that’s what we are going to try and do.”

“They had a sixth place and a fourth-place finish on this calf, but I really liked the way she split the gate and ran hard,” Herrin said. “I’ve had some calves this week that didn’t break as hard and fast and that makes me adjust my loop, so this calf was more to my liking for sure.”

This year’s NFR has been a tough-go as he only placed in one round – sixth in Round 2, 8.8 seconds – before Thursday.

“It has been all on me, I just have not roped like I know I can and then I started to question where do I go from here?,” Herrin said. “I made a horse change before Round 4 and went to Marty Yates’ back-up horse. My good horse Rambo wasn’t doing anything wrong; I was just trying to find something that would get things working for me again. Marty’s horse did great to, but again I just was not roping well, so I went back to Rambo and got things on the good side tonight.

“I think it might be, Rambo had been the one that has gotten me here and he is an amazing horse, but I think this might be his last trip here. He’ll stay at home and enjoy life in the pasture, but I can’t tell you how much that horse has meant to me.”

“I just trust my horse so much,” Briggs said. “We just have to go at it every night. This is a really tough group of ladies, and I am the only one that hasn’t hit a barrel, so even if I do it won’t kill me. So, you just keep going at the rounds and trust my horse and my training.”

Briggs, who is the only barrel racer so far not to hit a barrel, is second in the world standings.

“Definitely pressure there,” Briggs said about not hitting a barrel. “You wouldn’t have a heartbeat if you didn’t feel that pressure. I just keep trying to just be grateful that I am here and be grateful for what I have already accomplished. I just have to leave the rest up to whatever happens.”

Briggs was quick to praise her horse Rollo for her success.

“I sure hoped he would be successful here,” Briggs said. “He gave me no other indication to think any differently. I knew my horse could do it. I had to make sure my mental capability was strong enough to handle these 10 days. I am thankful for my support team which grew tonight with my mom (Kristie Peterson), my little girl and my sister all arriving into town. So, this South Point party is going to be awesome tonight.”